There isn't much about a carnival that I like. I know that sounds strange. I've never been able to figure that out myself. I just don't like carnivals. I've never been one for rides either. I get dizzy just watching the merry-go-round go round and round. Seriously, I just don't even handle the mildest of rides. 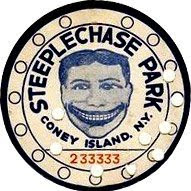 When I was a kid I used to go to Steeplechase Park at Coney Island. I liked to go even though there were few rides I could handle. I remember one time I went with my cousins Bobby and Joe from Pennsylvania. I was old enough to know you didn't have a crush on your cousin and old enough to want to please a boy. They talked me in to going on the roller coaster. I survived. It was very difficult.
Then there were those tubes that you walked through. Never having been coordinated, I felt like a fool. My mother said she always enjoyed the swing. I don't think I ever had the courage to go on it. I thought that was pretty whimpy that my mother liked a ride I was too scared to go on.
Adjacent to Steeplechase was the Parachute Jump. I would watch that thing and imagine what it was like to sail down floating with the help of strings and parachute. I sometimes wish I had worked up the courage to go on it. Coney Island is just not the same with out it.
Later in my childhood I went with the neighbor to Palisades Park in NJ with her Girl Scout troop. It was painful. She was so upset with me. I hadn't realized that the reason you took a friend to an amusement park was that you needed someone to be your partner on rides. She wanted to go on the Crazy Mouse. I said NO. She told me I was a bad friend and she wished she'd never brought me. I went on it. I survived. As I remember, it was fun. I am sure there is a huge lesson in that - it is okay to do thing you are afraid of because sometimes you find out they are fun.
What I do like about carnivals is some of the carnival games. I don't care for the tossing the ball, throwing the dart, knocking down heavy object type of games. I'm a Skee Ball fan. I also like those games where you squirt the water in a target to make a boat or something else move. That's the most competition I can handle.
I also like Wac-A-Mole. It can be quite exhilarating to wack anything. I usually do quite well with it. I may not be coordinated and I may be a whimp but I do have good reflexes. I like the instant reward that comes with wacking that mole back in its hole. 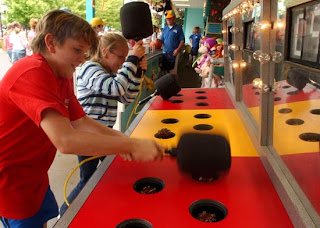 Sometimes I feel like my life has been like a perpetual Wac-A-Mole game. It seems that I go from one crisis or problem to another. I keep wacking at them. They disappear. Then a new one pops up. It seems they never stop. This game never seems to end.
Frankly, I'm tired of it.
Suddenly it occurred to me yesterday that I don't have to keep putting coins in the machine. I can walk away and not play this game anymore. I don't have to fix everything. Those little tickets coming out of that machine just don't buy enough happiness. I'm ready to stop playing Wac-A-Mole and live my life.
Posted by Joyce Lighari at 5:00 AM