Alvin had finished high school just before we married. He was a year older and a year ahead of me. As my class, Hickman 1969, donned their caps and gowns, I was preparing for yet another move. Having passed the test for his exhorter's credentials with the Assemblies of God, we packed our belongings for our first major move to Neosho Missouri, the flower box city 242 miles away. Neosho was to be the home of the new Ozark Bible Institute.
Neosho, only 76 miles from the international headquarters of the Assemblies of God, was at odds with its denomination. Worldliness had crept in to the Assemblies in the form of lipstick, eye shadow, television, short hair, short sleeves, mixed bathing, and all manner of sinful behavior. Their quarrel was not doctrine. It's quarrel were standards. Alvin was to be in the first class at OBI. As David confronting Goliath, OBI would be a challenge to the backslidden Evangel College and Central Bible Institute (now Evangel University and Central Bible College). They would teach only the Bible proclaiming


Without Holiness No Man Shall See the Lord 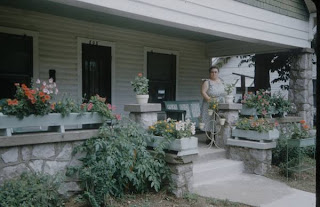 We found an apartment on the second floor of a house on College Street. The small three-room apartment shared a bathroom with a room lent out to an older man from time to time. The plan was that I would work and help support Alvin through school. The apartment was convenient. I could walk to downtown or church. A Laundromat was on the corner, clothes lines in the back.

Our landlady a pleasant but opinionate woman did childcare. They were worldly folk with a television. They didn't like the holiness people. They didn't understand why being Baptist was not enough for heaven. Nevertheless, our landlady had more compassion for me than most people.
Once settled, I began my job search. I would walk the square in Neosho day in and day out. There were many stores on the square, but I persisted visiting each store many times. I was 17-year-old high school drop out with a child. If I had money, my landlady would watch Nathan while I begged for a job. Other times, I carried him with me as I walked downtown to beg. Finally, the owner of the drugstore got sick of seeing me. He told me he'd hire me on a trial basis for 25 cents an hour. If I worked out he'd give me the normal pay of 50 cents an hour. It was my landlady who convinced me that I couldn't afford to work for that. It wouldn't cover the babysitting.
We couldn't afford formula for Nathan. He was too young for regular milk. I followed a recipe I found for homemade formula. Using evaporated milk and adding corn syrup and water, I made my own formula. Evaporated milk was cheap. Even so, I would have to collect bottles and pennies to have enough to buy just a few cans of milk to feed our son. Alvin found a job working nights at the Buddy L plant. He made barbeque grills. He would go to school during the day and work at night.
I decided to try high school again. I enrolled in Neosho High School. As a married woman, I wore only holiness standard clothing. Only a single woman could wear her hair down. I would secure my hair tightly in a bun or a French roll. My face scrubbed, I attempted to blend in with the class of 1970. Again, I took typing. The typewriters were all manual uprights. There were no letters on the keys to assure we learned to touch type on the QWERTY keyboard. Pounding the keys, I thought someday maybe I could get a good job as a secretary. 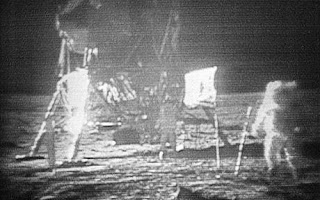 The evening of July 16, 1969 as we came home from the Wednesday evening church service, our landlady called to us. She asked us to come in. She said we shouldn't miss history being made. Alvin, ever holy, forbid television watching. We had just left church.

This Baptist temptress was luring us to forbidden territory. Live coverage of Neal Armstrong's stepping off the lunar module, the Eagle, was the bait. Ever sinful and prone to temptation, I begged to stay. We did. Nathan was placed on a pallet on her clean floor. I sat on the couch. Alvin clutched the doorknob still struggling in his soul with this sinful behavior. We watched the first moonwalk.
I had watched on the school television rolled into our classroom all the precursors to this day. In fuzzy black and white I saw Shepherd blast off into space. I had watched with wide eyes as John Glenn splashed down after orbiting the earth. I was so glad I didn't miss the winning lap of the race to space.
Alvin decided he didn't need Bible School after all. Back to Columbia we went. This time to another upstairs apartment west of Columbia over less hospitable landlords. My parents had moved to subsidized senior housing at Garth Towers. I was a frequent, too frequent guest in their home. We were thrown out of our apartment for lack of rent. We stayed with my parents. They were on the verge of being asked to leave because of our presence. My parents decided to rent a house that we could share. Our next stop was 909 Wilkes Blvd.
I got pregnant again. It was 1970. The Viet Nam war was raging. Uncle Sam promised money, insurance and security in return for service. Alvin decided it was time to do his duty for God and country. In spite of his deferment, he enlisted.
Underneath I was terrified. I was terrified I'd be a widow. Yet, there was another, even darker feeling lurking deep below. The abuse had already taken it's toll. I knew divorce was out of the question. Christians were forbidden to divorce. I was sure divorce would solidify forever my place in Hell. In horror at times I would think that maybe he would go to Viet Nam and be killed. I'd be free. I'd be a widow but I'd be free. 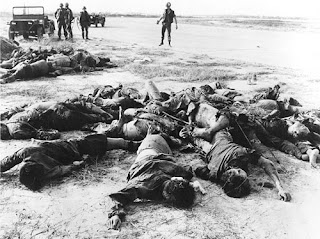 As if she knew, my mother-in-law would at times scream at me her own fears of Viet Nam. She would say he's going to get killed and it's all your fault. I would cry. I would beg God to forgive me for these horrible thoughts. He went to Basic. As Johnny Carson would come on the television each night, I would write long letters on blue stationary sprayed with cheap perfume telling him the activities of the day, pledging my fidelity and love.
Death was around the corner - my great ally and support had gotten sick. He soon would be gone.
Posted by Joyce Lighari at 5:00 AM