When someone tells you that you are weird, it usually isn’t meant as something nice. It means you are out of the norm. It means you just don’t do things like other people do. It is far from a compliment. Sometimes I wonder when people get that look on their face when they talk to me, if they think I’m weird. 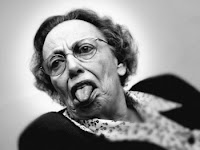 Yesterday I went for another interview for a doctoral program. I wonder what drives me. I’m really too old for this. Then I think of all the people whose contributions to life didn’t start until they were in their seniors years. I've already contributed in many ways. I had a great career. I have a wonderful family. Yet, I think I still have more to contribute. I'm not done. I knew someone else who was not done, the former Town Clerk in Cromwell CT.
I first met him when I also worked for the Town of Cromwell. A distinguished widower with striking white hair he had been Town Clerk forever. People would try to run against him. The Republicans would convince his assistant to run against him just so someone would be on the ballot. She never won.
Everyone liked Bernie. I was never sure how well he did the details of his job. I do think the assistant was best at the details. Bernie was popular because he knew you. He knew your name. He would stop and talk to you. He ate his lunch at the local grocery lunch counter.
Always dressed in a sport coat and tie, trim and handsome, he was in great shape for his 70 plus years. Coupled with his genteel personality, he was popular with everyone. Bernie evidently was elected before people cared as much about how many academic degrees you had. His highest academic achievement was a high school diploma.
At 70, Bernie decided to change that. Bernie enrolled at Trinity College, a prestigious college in Hartford, CT.  For a few hours a day, Bernie would be absent from the Town Hall. The assistant knew her job well, and another was hired to help her. Bernie was going to school. Bernie finished his Bachelor’s degree in history just in time to celebrate his 75th birthday. Bernie didn’t stop. He retired from the Town. His goal-a PhD.
I have that same goal. I have quite a few years until I’m 75. I already have a the requisite Bachelor and Master’s degree. I’m way ahead of Bernie. But I am no less driven than he must have been; driven to reach a goal that seems at times impossible.
At this interview yesterday, I was asked quite a few interesting questions. I was asked what I wanted to acquire by this degree. I had to think. Then I told them that once I was a single mother. I had married when I was 16 and became a mother at 17. At 23, I found myself a high school dropout living on welfare with three children, one an infant. I stood at a hospital window watching my peers in their black caps and gowns jubilant at receiving their college degrees. I had just given birth to the infant, my daughter Bethany. She was in critical condition. I was alone having been beaten and abandoned by my husband.

I told them that one thing I determined that day in front of the hospital window was that I wanted an education. I didn’t know how I would do it but I wanted an education. I wanted knowledge. I wanted something that no one could ever take away from me. I still want that.
That thing that rose up within me that Saturday in May of 1975 as I watched graduation from afar drove me to 3 ½ years later achieve the same degree. That thing still lives within me. It still rises up and drives me to pursue a dream that won’t die.
I will wait two weeks to hear the results of this interview. However, this blog is ending with a surprise. As I’ve been writing there was a loud bang at the door. I got up even though my hair was wet and I am still in my nightgown. I am glad I did. It was the mailman. He had a certified letter for me. Usually a certified letter is not good news. This one brought good news. It was from Trevecca Nazarene University.
The letter starts:
Congratulations! I am pleased to inform you that the Doctoral Selection Committee has selected you to be invited to become a member of Cohort 13 (oh, I hope that isn’t unlucky) in the Ed.D. program, Leadership and Professional Practice.
I guess they didn’t think I am weird.
Posted by Joyce Lighari at 11:07 AM