As I parked the car, I thought of all the hundreds of times I had pulled into that parking lot.  I got out of the car, took a deep breath and said “Joyce, you can do this!  It’s only a church service.”
My daughter had texted me earlier in the day saying she wanted to try out a program this church had for girls on Wednesday night.  We spoke of Daisies.  I remember my daughter in her yellow dress.  In those days, they gave you clothe and a pattern and told you to make the dress yourself.  I did.  The yellow with her golden hair made her look like a ray of sunshine.
You know, for your kids, you’ll do just about anything.  Certainly, a visit to a church, a church that had once been so much a part of your life, was a small thing.  For me, it wasn’t that small though.  I had worked at that church for several years.  I had pulled into that parking lot daily.  In addition to the job, I taught adults.  I preached in the pulpit.  I did counseling.  I got paid as a secretary.  I worked as an associate Pastor.  I loved that church and it’s people so very much.
Like many things in life, it soured.  Perhaps a topic for another blog –
As I walked in, a man was standing talking to a woman – they said hello.  There was my daughter and her daughters on the stairs.  I heard squeals of “Nana.”  That always makes me feel better.  The youngest granddaughter was taken up the stairs to find her room.  I started to chat with my granddaughter.  Then I heard “Joyce?!” – I’d been discovered.  I really thought that after 8 years, I could go undetected.  They had a new pastor.  I’d heard there had been a lot of shifting of the congregation as often happens with a new pastor.  I remembered the face, but the name escaped me.  He was an “approved” children and youth worker, so he had a badge.  Ahh, yes, that’s his name.
He hugged me.  We chatted about the flood that had devastated the church last year.  He updated me on the format of the service.  As we took our seats, the Pastor, with his “pastor radar up” spotted visitors.  He introduced himself.  We chatted a minute.  We took our seats.
A handful of people sprinkled the sanctuary/gym.  Familiar choruses led by the pastor with his guitar.  It all seemed so strange and yet familiar.  I looked around – a few familiar faces, but most not.  No one else recognized me.  As the music wound down, we were asked to bow our heads.  An altar call?  Now? Yep, there were visitors in the house – they might be heathen… so for our benefit we waited for a hand to be raised while I woman’s tinny voice behind us said: “Jesus.”  Since we were not heathen, he could only prolong the altar call so long.
We opted not to put the visitor card in the offering.  After the altar call I knew I didn’t want the pastor checking on me.  The topic of the night was “social dancing.”  I thought, huh?  This handful of seasoned saints had nothing better to discuss from the scripture than a harangue against social dancing.  My jaw dropped – my daughter wanted to go home and watch “Footloose.” 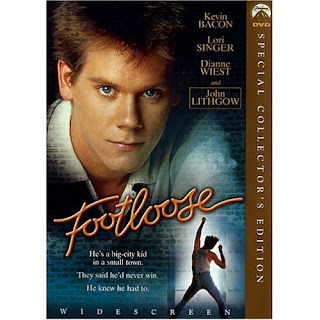 Like something out of 1960 at a youth rally, we heard about the evils of social dancing for the next 15 minutes.
He prayed.  We were dismissed to eat.  After we got our food we dispersed to round tables to discuss the lesson.  On the table was a tent card with discussion questions.  The two scripture references were from Timothy (1 Timothy 6:11 and 2 Timothy 2:22) – we were asked to discuss how dancing contradicted spiritual purity and the dangers of dancing.  The scriptures had to be checked with the KJV for authenticity.  Question 3 was my favorite – Considering the Hokey Pokey, etc., are there “innocent” forms of dancing.  You just can’t make this stuff up.
Finally, we were asked to discuss if dancing was right in church, what about line dancing, what dancing is right before God.  All loaded biased questions.
I behaved.  It wasn’t easy.  I reminded them that I thought we’d be better served with talking about how to have a pure heart, increase our faith, etc., rather than focus on dancing.  I also said that the Hokey Pokey and the Sunday School chorus Father Abraham had a lot in common.  Some people think Barney is the Antichrist too.
As we wound down, I was asked if I knew the blood verse?  It was found in Ezekiel 16:6.  It is used for healing confessions over someone who is bleeding.  I was munching on popcorn to keep a straight face.  I was amused.  I realized I was not the same person who came into the doors of that church for the first time 11 years ago.  Thank God for that.

I guess dancing is still a sin.  I think we have bigger problems in 2011 than whether a handful of seasoned saints in a small town in TN are social dancing or not.
Posted by Joyce Lighari at 11:01 AM