I'm sorry, but all I can do is pray

“If all you can do is pray, that’s okay.”
“I understand, but could you at least pray?”
“I’m sorry, but I don’t have time, but I could pray.”
If you spend any time in church circles, you’ve heard this.  We apologize for prayer like it is some substandard last resort.  I heard this statement from a Pastor just a few weeks ago in a church service in Connecticut.  I wrote it down.  I thought I’m going to blog about that.
I had forgotten about it until yesterday.  I love meeting new people.  I had that experience yesterday.  It was planned.  We’d been introduced via Facebook by a mutual friend.  I got in ol’red (my new name for old but faithful red car).  As I walked into Olive Garden I thought, I wonder what adventure God may be starting.
I thought back to a similar meeting in Connecticut.  I had been put in touch with a woman who was a leader in the Aglow International ministry.  We were to meet at a restaurant.  I found the place but it was closed.  From the driver ’s seat of my “mommy” van, I spotted her.  She was waving and flailing her arms to get my attention.  A short conversation and off we went to some other restaurant.  That lunch resulted in about 15 years of leadership, in three states, in that ministry.  It was a good run.  I learned a lot about prayer there.  Those folk don't do anything without praying first. 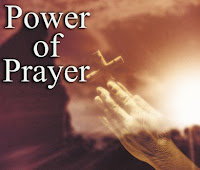 The woman I met yesterday is involved in a large national prayer ministry.  It made me think again about the prayer comments that always trouble me.  Why do we minimize prayer?  We shouldn’t, but we do.  Is it a ploy to keep us from praying?  Is it we don’t understand that the cliché about the “power of prayer” is not a cliché but a truth?
Jesus spent a lot of time in prayer.  It seems that nothing He did was not first considered in prayer.  There’s a lot about the Trinity and the Incarnation I still don’t understand.  However, I do understand that while Jesus was God Incarnate – in the flesh – He still found it necessary to consulted the Father, through prayer, about everything.  It seems there is some transaction that takes place when we bow our heads in prayer – we access the heart of God and we become one with that heart.
Maybe we minimize prayer because actually, it’s not that easy. Oh, we can recite prayers and move on.  I am not opposed to the recitation of historical, traditional, and Biblical prayers – they are meaningful and powerful.  I have practiced the Divine Hours myself and found it very meaningful.  However, for most of the things we need help with, it takes a deliberateness of time and energy to seek God.  We are lazy.  We’d rather give money to a project.  Sometimes we’d rather do the work than do the praying.  It seems easier.
Nothing attracts the devil’s attention like praying either.  I used to go every day on my lunch hour to pray.  Oh we saw glimmers of revival as my prayer partner and I knelt in the empty church every day.  We also saw every aspect of our lives torn upside down – everything was shaken.  And unfortunately, I have to tell you, it was enough to get me off my knees.  I was so beaten down by life at that point, I could barely stand.  But I did… and eventually got to my knees again.
I come from a tradition that used to talk about "praying through.”  Sunday night would find the altars open and the saints on their knees crying out to God.  It wasn’t just a “now I lay me down to sleep” sort of prayer – it usually was accompanied with tears and petitions.  Many a time the puddles of tears had to be wiped up from the altar bench.  That’s what they meant by praying through – praying until their heart was one with God’s heart on the matter.

Next time you’re tempted to apologize that all you can do is pray, remember that nothing happens without prayer.  It's IMPORTANT.
Want to see the Kingdom of God advance?
Get on your knees.
Posted by Joyce Lighari at 10:22 AM