I Now Pronounce You...

July 2, 1968 wearing a white satin princess cut dress with bows on the shoulders attached to a six-foot long white train, I walked down the aisle at First Assembly of God in Columbia Missouri.  So long ago, I almost can’t remember the details of the day. I am sure much of the memories of those hopes, dreams and anticipation has been erased by the pain and abuse that followed.

I have five daughters. I have looked at them when they passed through their 16th year and wondered how my mother could have ever allowed me to get married at 16. She had to give permission. It was the law. Even the law knew that a 16 year old shouldn’t be making such decisions on their own. In fairness to her, I am sure she thought she was doing what I wanted.
Alvin was a good church going guy at the time. We believed in a theology of redemption and individualism. His parents, his upbringing, even past sins could not stop the grace of God and the work of the Holy Spirit in one’s life.  I spent time in my childhood at the original Teen Challenge facility in Brooklyn. I’d met the major players in the life and ministry of David Wilkerson and the famous Cross and Switchblade book.  All we saw in Alvin was a young man with a call to ministry. Perhaps this was the way to keep the wayward daughter on the straight and narrow, married and secure in the fold.
My mother said that she cried all the way back from the courthouse after signing permission for me to marry. I didn’t understand that at the time of course. Now I wonder if she had a moment of clarity. Or was it tears of disappointment, or of regret? I don’t know. She just said she cried. She just said, “what have I done to my daughter?”
I think the bigger question is why did she sign those papers. I think the answer is complex. Answers like this always are very complex. I doubt even at the time she could have told you exactly why she did or didn’t.  At the heart of it I am sure was a fear that I was pregnant. The solution in 1968 for pregnant teen agers was to marry them off.
I know that this is the case because we had a conversation about it one week before I got married. We were walking around a grocery store and I made a remark about women’s sanitary products. She replied that I certainly wasn’t going to need them for quite a while. She thought I was pregnant. I informed her that I wasn’t as I was experiencing the proof as I spoke. It was one week before the wedding. I wonder if she had further regrets for signing those papers. 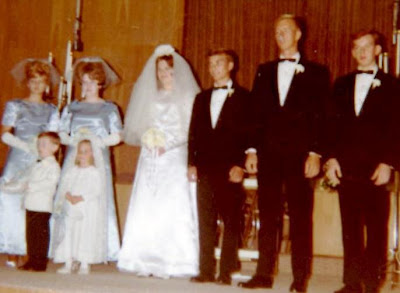 Being a mother, I understand that we never fully realize the impact of a mother’s decisions on the lives of her children. A mother does the best she can, always motivated by love and a mixture of other influences. Nothing is ever pure or perfect.  I wonder what went through her mind as she sewed the dress I would wear to become Mrs. Alvin Harry Lynne.
A rented white altar, the songs Wither Thou Goest, Because, and Savior Like a Shepherd Lead Us, shocking pale blue satin dresses, a flower girl and a ring bearer that I didn’t know, all are images of that day. A congregation of people, new people in my life, yet people with open and big hearts to this seeming prodigal daughter, now dressed in white, exchanging holy vows to one of their own. We were two children attempting to jump into adulthood and adult responsibilities.

A couple of years ago I was in that sanctuary for the first time in probably 30 years. The building looked the same. The neon Jesus Saves sign still proclaiming a basic truth of the gospel.  I remembered the day we exchanged our vows. Memories, so mixed, so complex, so overwhelming filled me as I saw in my mind the saints who that day were sitting in their favorite pew. The pain of the past was once again soothed over by the memory of love. Not the love I had for him nor his for me, but the love of the community of faith.
They showered us with gifts, well wishes and love. The pastor’s wife assured I had the flower girl and ring bearer I wanted, children who had served in other people’s weddings and had the appropriate clothes. That night at First Assembly, the ring bearer, now the pastor of the same church was preaching the word of God. It was surreal. 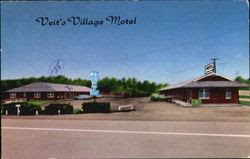 After the I do's, the cake and punch, on a Tuesday evening in July we got into our car, a 1951 Chevy with three on the column – it was a tank.  A vehicle I never learned to drive. Our destination was Veits Village a very cheap motel in Jefferson City.  Just married sign and cans on our car, followed by the wedding party and a few friends, our married life began.
Posted by Joyce Lighari at 9:36 AM