The Balance to Cross

I don’t remember what I wore that day. I am sure it was a dress of some sort. We still were required to wear dresses in public school in those days. The church was very conservative and pants were never allowed anywhere.

When moving to Missouri, we had started at First Assembly. It was the logical choice. We had always been Pentecostal and strict. No make-up, no movies, no card playing, were standards of my upbringing. Even a simple game of “Go Fish” or “War,” played with "devil cards" were unacceptable.

I’ve written before about not being able to see Sleeping Beauty. One of the arguments was, even if the movie is okay, would you want to be watching a movie when Jesus came back? Heaven forbid - your rapture readiness would disappear in the twinkling of an eye.


This church added no pants, no short sleeves dresses and no mixed bathing (swimming in the presence of the opposite sex). Television was frowned upon with long hair preferred for girls. I guess my parents thought this rebel would rebel further, so we went church shopping. I have no idea how many churches we visited. Several we stayed at for a while. Some, too formal for Pentecostals, warranted only one brief visit. Eventually, I said, I think we should try First Assembly again. They agreed.
For whatever reason, it seems more welcoming the second time.  The pastor’s daughter, who was my age, came one Sunday afternoon inviting a trip to the Dairy Queen – she just showed up. Still a dear friend, she made me feel welcome that day. My parents sighed a sigh of relief. We found a church home. Once again, the prodigal daughter, who in reality was never a prodigal at all, seemed safer in the fold.

I must have met him before, but I don't recall. He was just a guy in the church. Someone I never thought would even look my way. He would come to church in an ill-fitting suit strutting to his seat in the front pew. The pastor seemed to like having the young men sit directly in front of him. Everyone was a potential future pastor. Alvin, perhaps looking for a father figure he never had seemed to be a very dutiful disciple.
Under the watchful Jesus Saves sign, Alvin approached me that Easter Sunday. He asked me if I wanted to go the Pinnacles Park north of Columbia for a picnic the next day. We were out of school for Easter Monday.

Other than a couple of dates with a guy that year in Columbia, I only had one boyfriend before that in Brooklyn. I was in the 9th grade, he was a Senior. He was moving into life. I was immature and needy. Seeing my insecurities, he moved on. All the talk of sexual exploits were totally untrue. My virtue was clearly in tact.


I really felt I would never get married. How does a 16 year old assume such a thing? I should have thought I had my whole life before me and not worried about getting married. Here was this handsome seemingly Godly young man asking me out. I said, “of course.”

Not being allowed to wear pants, and thinking he very godly, I had to wear culottes. I remember those culottes well. They were a culottes dress which meant I had to get completely undressed to go to the bathroom. A risky move for a day in the wilderness. It was white with red polka dots. Already being a good seamstress, I had made this hideous outfit myself.


I have never been good with outdoor activities. I am sure that comes from growing up in Brooklyn. We went to this very rustic, undeveloped park for our picnic. I remember trying to cross a log over a stream lacking balance I ended up in the water. Something clicked between us. We were both needy in ways we didn't understand.
Like the log I could not cross, I was about to attempt a much more dangerous bridge. Years later I would nearly drown in the water. 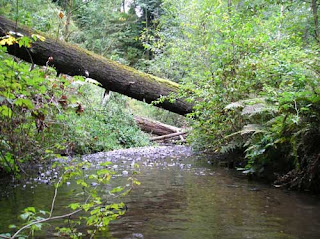 That day it was about attention and insecurity. Perhaps I was not so undesirable that I could never find a husband. Perhaps echoes of the sense of violation of my virtue, leaving me unworthy of marriage. My molester had told me things that while forgotten still echoed in my soul.

I don’t know what it was for him. I do know that from that day on, we were a couple. Most of our activities centered on the church. Our Saturday night date was visitation at the nursing homes, the cancer hospital, etc. One older woman would look at Alvin and tell him he reminded her of Jesus. When we were alone, he did not act like Jesus though. He claimed a call to ministry. I dreamed of a future as a minister's wife. Validated and pure, I would finally be regarded as worthy.
As predators usually do, he sensed my insecurities. Much later I found out he had dated other girls who were new in the church and seemed insecure. He was on the prowl, on the hunt. He wanted to marry. Why? I’m not sure. He was 17. I was 16. We thought we were old enough to know what we wanted to do. I succumbed to my insecurities thinking I had better jump at the chance to get married while I could.
Heaven knows, no one else would want me – or so my thinking went.
Posted by Joyce Lighari at 9:46 AM