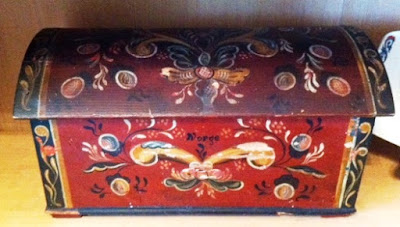 I don’t know for sure if it really was my grandmothers.  That’s the story I’ve always been told.  I do know that it is old.  I do know that it is from Norway.  I do know that it has been in our family forever.
As a kid, it stored pictures.  It was full of all sorts of odd and assorted pictures.  I would take it down and go through each picture.  I’d annoy my mother with questions about those I couldn’t recognize.  There were the usual assortment of black and whites of children of friends, wedding pictures, pastor’s and their families – just an odd assortment.  Usually important pictures were stored in an album.  Oh how I wish I had those albums.


So many things from my past are gone.  Too many moves, a house fire, carelessness, etc., have left me with very few items from the past.  I thought my grandmother’s box was gone forever too.  I would sometimes think of it and wonder.  Could it still be in Connecticut?  No, I know we brought it with us to Tennessee.  Did careless workers throw it out at the farm?  I didn’t know.
No it’s been in my daughter’s closet.
She’d come home and was cleaning out her old room.  As I went to see her progress, I looked up.  There it was.  It was on a shelf in her closet.  My mouth fell open.  She looked a bit embarrassed.  I gasped: my grandmother’s box!!  She said: yes.  With a tear in my eye I said: I thought it was gone forever.  She said: no, it’s been here.
It was an awkward moment.  I didn’t know whether to take it or not.  I didn’t know if she had taken it for sentimental value.  I didn’t know what it meant to her.  I just was so relieved it was safe.  As she took it down and gave it to me, she explained.  Grandma gave it to me.  I said: it wasn’t Grandma’s to give.  Grandma had discarded so many things that I still held, like her mother’s serving bowl, the salad set she got when she married my father, a few pieces of her tea set also a wedding present 74 years ago, a few pieces of her “good china.”  So few treasures of the past, all precious, but a scan representation of my past.
She scattered some things to my brother.  A brother who never honored her in life holds pieces of her life.  He has her autograph album sharing her conversion story and that of her closest friends.  He has my father’s bible where he wrote his family history and his conversion story.  I do have my mother’s bible though – I treasure it and have honored their faith by making it my own.  Now, my grandmother’s rosemaling box was back with me.
I don’t care why my mother gave it to my daughter.  As I lovingly held it again and memories of being my daddy’s lille venn flooded over me, I promised her that the box was hers when I died.  Until then, it is now where I can see it – it’s next to the Norwegian dishes and Norwegian flag.
So much of my life has been fragmented.  I feel so disconnected from my past.  Too many moves… too much distance… but I have my grandmother’s box from Norway.
It reminds me of the parable of the lost coin, Luke 15:8-10.  Maybe I should have swept more often but in cleaning her room, my daughter unearthed a treasure for me - God knew where that treasure was - He knew.  He knew my heart longed to see it and hold it again.  But the greatest treasure in my life is the faith my parents gave me - that is the treasure that cannot be lost.  Jesus is the treasure that is held in my earthen vessel (2 Corinthians 2)- it is a treasure that was given to me by my mother and dad -
My grandmother's box reminds me that the treasure, the treasure of Jesus has come down through the generations - it is now mine to preserve and pray for my children and grandchildren.  I think my grandmother's box should now be a prayer box. In it, I should put pictures of my children and grandchildren.  Pictures that remind me to pray that one day, they'll hold the same treasure of Jesus in their hearts.
Posted by Joyce Lighari at 11:35 AM