My Roots Are Showing

I was in Aldi’s today.  For those of you not fortunate to have an Aldi’s near you, it is a grocery store plus.  To a lot of people, Aldi’s is new.  I was shopping with food stamps at an Aldi’s near the corner of Garth and the Business Loop in Columbia MO when my kids were little.  I’d do some laundry next door at the Laundromat and go to Temple Stephens grocery store for the things I couldn’t get at Aldi’s.
The quality and choice keeps getting better at Aldi’s.  Today I was on a quest to quickly buy one of the few carpet steam cleaners they had on sale.  As I meandered through the aisles I kept intersecting with this woman.  She looked to be in her mid-60’s.  She was tall and had pure white hair.  Dressed in simple light blue pants there was nothing unusual about her except her hairdo. 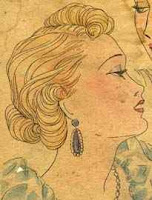 Now this was a “hairdo” not necessarily a hair style.  The word “do” fits.  As a lifelong Pentecostal, I’ve seen this do many times before.  This woman was sporting a “Pentecostal Roll.”  A Pentecostal Roll looks a bit like this but with the glamour and the extra rolls in the front:
Seeing this woman got me to thinking about my roots.  I don’t remember when I first heard the word Pentecostal and that we were Pentecostal.  This was before the days of being able to say you were Charismatic.  It was also before the Pentecostals moved to the right side of the tracks.
When I was kid, I learned very quickly that Pentecostals were also called “holy rollers.”  I don’t know what the connection was with the Pentecostal Roll hairdo and the rolling on the floor – I did hear stories of people dancing in the spirit until their hair pins fell out and their hair cascaded down.  We were Norwegian Pentecostals, so as far as Pentecostals go, we were quiet.  I remember my concern when I would see beloved adults with tears streaming down their faces.  My mother would assure me that everything was fine.
I rarely admitted that I was Pentecostal to my peers as a child.  If asked about my religion, I would say I was “Assemblies of God.”  There were NO Assemblies of God churches anywhere in my neighborhood in Brooklyn.  That would lead to the question, “What’s that?”  My answer would be, they are a like Baptists.  That way I wasn’t lying since Assemblies of God folk were Pentecostal and they were a bit like Baptist.  Early I learned the stigma of being Pentecostal.
My mother wasn’t Norwegian.  Her early days as a Pentecostal must have been lively and loud.  The church where she came to faith in Christ had been a Christian Missionary Alliance.  Shortly after the Azusa Street Revival of 1906, this church became “Pentecostal.”  In 1931 a young girl of 13 walked from Wayne Hill, a less than desirable address in Waynesboro PA to a Pentecostal church.  She was invited by her lifelong friend Marguerite.  The church had been in revival with Pentecostal revivalist, Hattie Hammond.  The young Elsie, came to faith, was filled with the Holy Spirit and spoke in tongues.
Her babysitting money was used to purchase her cherished Bible.  When I miss her, I flip through its sacred pages.  Later she would lead her mother and father to the Lord. I stood beside her as she shared these stories at the anniversary in 2006.  Already a little confused, it seemed with help, the memory and the tears flowed.

In 2006, my husband and I took my mother to the 100th anniversary of her home church.  I heard again the tales of those early Pentecostal days.  I heard again about the spite wall and the balls of raw dough.  It seems these early Pentecostals were serious about prayer.  With windows open on a summer night, they would be on their knees crying out to God.  The church was close to its neighbors on either side.
On one side, there was a bread bakery.  While these folks were pray, the bakers were baking.  Irritated by their loud prayers, the bakers would hurl balls of raw dough in the open windows.  It didn’t deter these stalwarts of faith.  In 2006, the bakery was gone replaced by a hardware store.  I shudder to think what might have happened if it had been there in the 1930’s.
Most interesting was the neighbor on the other side.  This neighbor was so irritated by the loud Pentecostals that he built a fence out of concrete blocks up to the second story of his house.  The believers called it a “spite” fence.  It’s still there.  It’s still there as a testimony of folks who stormed heaven.
No one builds fences to filter out the noise of our prayers.  But these are my roots.  Today my roots are showing.  I decided to show them to you.  What are your roots?
Posted by Joyce Lighari at 10:23 PM