Yesterday we did the mini-Brooklyn nostalgia tour.  I so love returning home.  I think anyone who is disconnected from their roots and home can understand the feeling one has when you return "home."  I suppose it is also understandable that those with me don't feel the same warmth and exhilaration when they see the streets, shops, trees, churches, and diverse people of Brooklyn.

As we toured, I told my 17 year old granddaughter that she had visited Puerto Rico, China, Israel, and the Arab Middle East in that afternoon alone.  There was a quick trip into a Norwegian shop a remnant of a large Norwegian community that was replaced by the Chinese.  As we left, we munched on Kransekake and Krumkake.  YUM.  In my hand was a block of precious gold - Nøkkelost cheese.  I will savor every bite of it later.  Those with me could never appreciate its flavor or delight in its taste as I will. 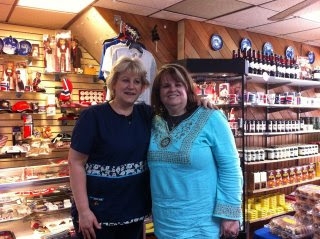 The last stop was Hinsch's. I don't recall when was the last time I was there.  It was likely around the time I was sitting in Mrs. Cedar's class in the fourth grade at PS94.  A frequent ritual was to accompany my bff Barbara and her grandmother Rose to this delightful old-fashioned soda fountain/ice cream parlor.

The 33 block walk each way was hard on the little legs. The walk was worth the feast of a hamburger and crinkle cut fries.  Barbara and I would share the fries.  She liked ketchup; I didn't.  My pleas to put the ketchup on the side were unheeded.  I would hunt for fries not smothered in ketchup.  I'd give anything to share fries with Barbara and her grandmother again.

My family has a difficult time appreciating my walks down memory lane.  It's not their memory.  I ordered egg creams for them.  I savored two sips of a vanilla egg cream as my lactose intolerance prohibited more.  I twirled a little on the stool at the counter.  I looked longingly at the booths and pictured a little girl with her bff and Rose - Rose always wore a hat.  I could see her.

The server became an instant friend of my granddaughter Maria.  Here is their picture: 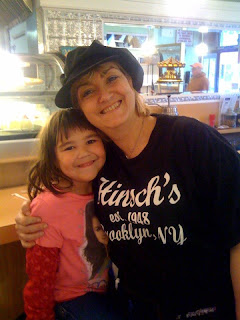 As we lingered a bit longer, Edna came in.  Edna was greeted by Lisa, the server.  Edna ordered some vanilla ice cream to take home.  Edna got a big hug from Maria.  It was like an instant family!  Once a Brooklynite, always a Brooklynite.  Edna, probably in her 70's, had lived in Brooklyn all her life.  She told me that she had loved once but the day before her wedding to her love, he died.  He died in a scaffolding accident.  Their apartment lovingly furnished for a life together was never lived in - she gave their furniture away to the Salvation Army.  She told me she'd never found love again.

It was like I knew her all my life.  It's like that with people from Brooklyn.  As she left, she said, "I'll see you tomorrow."  I said, "no" with a frown.  I wish I could see Edna today.  She told me I was good looking - then she exclaimed:  "But you work here."  I said, "no, I'm just visiting - I don't live in Brooklyn anymore."  She told me to talk to the boss, a typical Brooklyn guy sitting reading the newspaper on the first stool.  She was sure he'd give me a job.

Sometimes I fantasize about moving back to Brooklyn.  Yesterday, I knew I could.  I knew I could find Edna's and Lisa's and even the guy on the stool who'd welcome me back to my home.  I'm homesick.
Posted by Joyce Lighari at 11:03 AM