You know the old saying "Nothing Ventured, Nothing Gained?"  Well, a lot of times I venture - no one can accuse me of not venturing... however, I get very frustrated because I thought if I ventured, I'd gain... that hasn't been the case much of the time.  Now before you say - Oh there she goes again... this is not yet another lament of mine.

Many of you have seen the pictures of the pies and cakes, etc., that I post on Facebook.  I even have one endorsement on Facebook "Branch Out" - it says, “She makes great pastries!”


It's true.  I do... She was a customer in my coffee shop.  I used to make amazing food - breakfasts, including huge omelets with spinach, feta, and mushrooms - and then there was those Pumpkin Spice Waffles with Cinnamon Butter - OMG, my mouth is watering... My chicken salad was known as the best and so popular I had to start selling it by the pound.  Once I was asked if I could ship it out of state - I think they wanted to have me send it to Indiana.  I considered it. 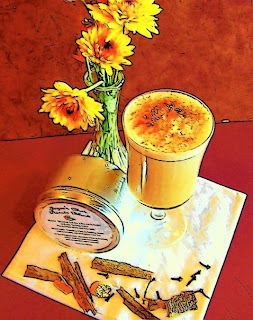 But one of the most popular items, especially this time of year was my private Vanilla Chai Latte Blend.  You could have it hot, cold, frapped, sugar-free, decaf, or regular.


Eventually, I packaged it and sold it for home use.  I even sold it for a while on ebay.  It didn't sell well on ebay because it is one of those things you have to taste to appreciate.  One of my regular customers, an exec on music row would stop every day - he would lament on days I was closed because he had to "settle" for Starbucks Chai Latte.  Yes, it really is that good!


I'm thinking that maybe it is time for me to make some Chai Latte Blend again.  The spices and blend is secret and ground fresh.  It is better than anything you've ever had.  I will be taking orders soon.  And yes, that is a real picture of the real chai on the postcard and made into a drawing to the rif

And if you are interested in some homemade organic pies, cakes, or bread for the holidays. I'm taking orders for them as well.  I do make amazing pastries....

Let's see if this venture has some takers.

More pictures of the coffee shop, its food, coffee, chai, and entertainment are available here.  Yes, once upon a time there was "myspace." LOL