A Minefield of Pathology

I like to think I’m not terrible thin skinned.  It’s a myth.  I rather think the reality is that it’s a myth for most people. We are human.  We get hurt.  We hear something, read something, and all those mines in our emotional field go off.  Sometimes they all go off at once.  Other times, it’s one or two. 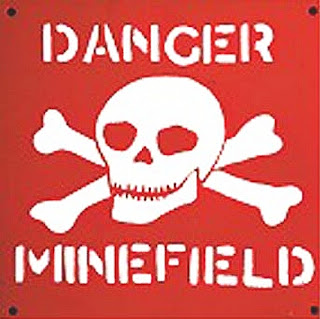 The booby-traps are everywhere.  Sometimes some unwitting (or sometimes dimwitted) person in a store triggers a life-time of feelings. That happened a lot in South Dakota.  A trip to Hy-Vee or Wal-Mart in Brookings SD usually resulted in my swearing to myself the whole way home.
Other times it is a remark that you know isn’t personal but somehow, it gets under your skin.  It just sort of sits there – like an unattended wound, it festers.
Last night two mines exploded in my heart.  My mood went from good to bad very quickly.  You try to remove yourself from the trigger but once it has been pulled, it is impossible to stop.

Boom – you never expected it – you didn’t see it coming.  You were not the target.  No one knew that you were the one who would explode inside.  And I don't want people who walk on eggshells around me either.  That's phony. That's not real.  I want the freedom to be myself and for others to be themselves around me.  If I trip their mine, I want them to know it's not intentional.  Most of the people who trip mine don't intend to either.  If we walk on eggshells, we are never really real.
The first was a conversation people with degrees.  There was the usual banter, none serious, about how people with degrees are not smart.  The word idiot was used.  Believe me, I can think of some people who have no common sense and are blithering idiots who managed to get advanced degrees.  It’s one of those things that really rankles me.  I've been turned down for jobs because I don't have a doctorate and now that I almost have one, I'm told it's not the right kind - it's not a PhD - only PhD are worthy... so I understand the comment.
However, I’ve spent a lifetime trying to measure up –  after much agony and trying, I still can’t seem to stop trying to be good enough.  Okay, it’s MY PATHOLOGY.  It’s how I am.  You can’t fix it.  I can’t fix it.  It just is.  All I can do is monitor it and make sure it doesn’t overwhelm me to the point of despair.
You see, for many years, as a high school drop-out, I was viewed as stupid.  Only a stupid person would marry at 16 and drop out of school – logic makes perfect sense, doesn’t it?  But I wasn’t stupid.  Only a stupid person would live with an abuser.  But I did because God hated divorce.  I wasn’t stupid.  My blog has told you this story before, I don’t need to repeat it. I could go on and on with examples.
Now here I am an old woman.  I am getting used to the reality that my life is shortening fast.  I am trying to fulfill a lifetime dream of more education and yes, still trying to demonstrate that I’m not stupid and I’m worthwhile.  It was my emotional minefield.  Nothing else.  No one else.  Just my pathology.
Soon another landmine exploded last night.  There may be one today.  There are many of them.  I’ve been told I’m a survivor – I am…
But I do have my minefield of pathology – and so do you if you are honest.
Posted by Joyce Lighari at 5:09 PM