I'm not drinking the Kool-Aid

I had an interesting conversation with a friend yesterday.  She’s one of those friends that pops in and out of my life.  I’d like it if we were closer friends, but it’s just the way it is.
She had called while I was in Florida.  One of my daughters has been accepted at a law school in Florida.  I’m so proud of her.  Of course, I’m proud of all of them.  I have three daughters who have chosen the law profession.  I am sure there is somewhat of a glass ceiling in the law profession.  However, with three women sitting on the Supreme Court, that’s one-third of the court, I think the glass ceiling is at least cracked.
I returned her call on the long drive back.  We caught up in various ways.  She has been in ministry.  She has been ordained.  I think she has pastored.  If not, she has been involved in pastoral ministry.  She is scholarly and has a firm theological foundation.  She has had a hard time finding her place as far as worship and ministry opportunities.  I certainly can relate to that!  Our conversations often wander into our theological pursuits and ministry opportunities.
I was shocked at our conversation yesterday.  The contrast between a daughter, a female, a girl, beginning her law education with no barriers because of her gender and listening to this friend’s changing opinion concerning women in ministry gave me mental whiplash.
I listened to her.  I didn’t criticize or debate with her.  I believe in letting everyone decide things for themselves.  I knew she’d been doing a lot of reading.  I knew she had previous said she had a call to ministry.  But now, in the process of exploring a new denominational home for herself, has concluded that women don’t belong in ministry.  In some kind of logic I can't follow, she said that only churches with male leadership and that exclude women have good preaching.  She said that the churches where women are allowed to preach do not have good preaching.

She did however, comfort me by saying she didn’t think it was a sin to go into ministry as a woman OR that a church having a woman pastor was not a sin. 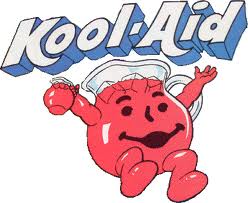 I thought, HUH?  I thought about how Jesus empowered and included women in ministry.  He chose them to be the first evangelists proclaim Christ is Risen.  They were at the day of Pentecost.  I thought of Priscilla – did you know some scholars believe that Priscilla may have written the book of Hebrews?  I don’t know if that’s true but it’s an interesting thing to mull over.  I thought about how Jesus is the normative norm that trumps all – therefore, why aren’t we including women in ministry?  I love my friend but I thought:  what Kool-Aid have you been drinking?  With the glass ceiling still so high in theological and religious circles, why in the world are we still having these conversations?  I think one of the reason is that women are afraid to follow their calls and they – yes, drink the Kool-Aid.
Then today, I read this blog.  Ahhh, thank you Sister!  People occasionally challenge me concerning my call to ministry.  They question whether a woman – even though we have women doctors, lawyers, politicians, etc., should be following this call and if it could possibly be genuine.  I probably could get into scholar debate with them – but I don’t.  They don’t want to hear it anyway.  What I say as nicely as I know how – God called me, I know that – I have no doubts – and since He called me, if you have a problem with it, take it up with Him.
Posted by Joyce Lighari at 11:17 AM