On those very rare occasions when my family of origin would gather for an hour or two.  That was all we ever did.  We were never close.  My brother's estranged themselves from my mother and I over thirty years ago.  At first it seemed just the way life was, family, moving and such.  But now I know it was deliberate.  They had no use for their mother and they never took the time to know or care for their sister.

When we would meet together, the bond between my brothers was solid.  They would laugh and joke and reminisce about a father I didn't know.  Often I thought them cruel and disrespectful, a strong characteristic of my eldest brother. I suspect their stories were filtered by their emotions.  However, my father was a different person by the time I came along in his early 50's.  Having passed 50, I know that the woman I was at 50 was not the woman I was at 30.  Our birth certificates all name the same man, but we didn't not know the same father.

On one of those occasions my older brother told me a story about our father.  Now this was the type of man I remember.  It is a Thanksgiving story.  It was either before I was born, or when I was very little.  There were no trips to the parade with me that year.  That Thanksgiving morning my father took a walk instead.  There was nothing unusual about my father taking a walk.  He called it his "constitution."

Every day when he'd awake from a few hours of daytime sleep (he worked nights), he'd get dressed and go for his afternoon constitution.  A brisk walk, regardless of the weather would often include a trip to the library.  My father would go to the library to read the newspaper.  He was a frugal and practical man.  He would buy the New York Daily News because it was tabloid size and easy to read on the subway.  He would go to read the large awkward pages of the New York Times at the library.  There was no need to buy two newspapers when the library provided them for free.
Thanksgiving morning the library was closed.  This was before the consumerism of Black Friday so there were no ads to study either.  He went to the park.  Our local park, Sunset Park was glorious.  The playground was at the top of a hill.  The lawn started at 5th Avenue.  At Sixth was the playground and at 7th Avenue you had the entrance to the pool.  It is a beautiful park.  I learned to swim there.  I could see the Statue of Liberty from the playground.  And I would swing to the clouds.

My father found a lonely man at the park that day.  I understand he was Norwegian. He lived in a boarding house alone.  He was an alcoholic.  Perhaps moved by the Spirit of God, or just human kindness, my father, ever friendly and relational, talked with the man. 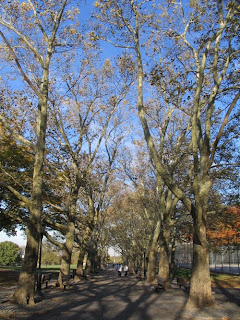 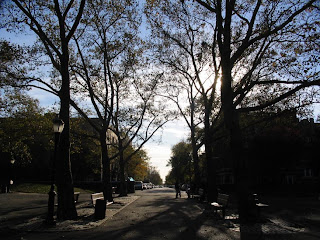 A walk on a winter's day, perhaps on one of these benches sat the man.
In the spirit of thankfulness my father brought the man home with him for Thanksgiving dinner.  Oh was my mother upset.  I wasn't there but I can imagine.  My mother always tried so hard to cover up her feelings of inferiority.  Having an alcoholic Norwegian at her table for Thanksgiving was not acceptable.  I never remember seeing my parents fight, but I do remember long silences and icy stares.  I imagine that was a very quiet meal.  I imagine the next day there were words and icy stares.

My father persisted.  The man enjoyed a good meal, perhaps with the grapefruit appetizers I mentioned yesterday.  That Sunday found the man in church with my father.  My father gave him a suit.  I am sure that it was a sacrifice for my dad.  Money came hard on a janitor salary.  Fine attire and suits were necessary to worship in those days.

The man came to faith.  The man gave up drinking.  The man got up and testified in broken English that if it hadn't been for Brother Johannesen, he didn't know where he'd be.  After finding a new life in his new suit, the man died.  I don't know what he died of, my brother didn't say.  He died within six months of that Thanksgiving Day in Sunset Park.  He died at peace, with a church family to mourn his passing, dressed for burial in a hand-me-down suit, all because a man took a walk and saw beyond appearance, smell and misfortune.

I am reminded of the movie Blind Side with Sandra Bullock.  It was a blockbuster at the movie theater but how few of us are like my dad and the woman in the movie seeing with eyes that truly see the worth of another.
Posted by Joyce Lighari at 10:14 AM