When I was a little girl it seemed my mother had been up all night.  As soon as my eyes opened, and my nose awoke, the smell of turkey would fill my senses.  My mother was not a great cook, but she could do Thanksgiving very well.
As soon as I had a bowl of oatmeal to stick to my ribs and keep me warm, my father would tell my mother to dress me warmly.  I would don a hat and scarf and leggings.  No they were not the footless tights we now call leggings.  These heavy wool leggings matched my coat.  They were held up by suspenders.  I routinely wore suspenders as a little girl.  Now that I think about that, it seems odd.  At the time, it didn’t.  They must have weight 10 pounds but they were necessary to keep my legs warm.  If there was snow on the ground, I would also put on my galoshes with the buckles on the side. 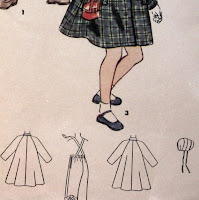 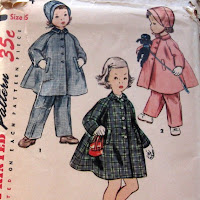 With my hand in my dad’s, I’d walk down 53rd street to 4th avenue.  In front of Johnny’s candy store, was the entrance to the subway.  Token in hand, we’d turn the turnstile.  Sometimes my dad would tell me to just go under it.  I did.
It was always an adventure to go down the stairs of the subway with my dad.  It meant a trip to a museum or to the zoo.  I loved going anywhere with my dad.  This time, we were on our way to the Macy’s Thanksgiving Day Parade.  We’d find our place behind a police barricade.  While others were forced to stay behind the barricade, I would sit on the curb with my feet in the street – I was not behind the barricade.  Somehow that felt like I had an advantage.
I was so excited for the parade to start.  I loved the marching bands and the colorful floats.  I would watch the giant balloons come around a corner, first Snoopy, and then Mighty Mouse and of course the giant turkey.  But I was waiting for Santa.  I believed in Santa.  But I also believed that the only true Santa was the one at Macy’s.  The other Santa were fake.  Those bell ringing Santa, three to a block, were fake.  But Macy’s Santa? He was the real deal.  I waited impatiently for my first glimpse of Santa. 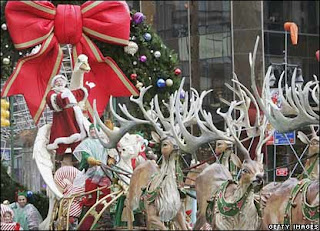 Then the band would turn the corner playing Santa Claus Is Coming to Town.  I couldn’t sit on the curb any longer.  I would jump up so excited for that first glimpse of Santa.  There he was, like a king on a throne.  The microphone to his mouth broadcast the names of the children he was going to visit with Christmas delights.  He said it.  He said JOYCE.  I heard him.  I was blessed.  I was special.  Santa knew I was there.


The trip home on the subway seemed so quick.  I could hardly wait to tell my mother about Santa.  I would dream for weeks about his coming on Christmas Eve.  As other children waited for Christmas morning, Santa came early to our house since we were Norwegian.
My mother had worked her magic.  Our table in that very humble railroad flat looked like something out of a magazine.  It was the only time of the year we had an appetizer.  Usually it was grapefruit.  She would scoop out the sections, sugar them, and flute the sides of the peel to make a cup for the fruit.  The fruit would go into the cups made from the peel, sprinkled with brown sugar, it would go into the oven.  A cherry would grace the middle.

The feast was served on her "fine china."  The fine china was a free premium when my parents bought their first television set.  The dishes were trimmed in 14 caret gold.  Usually the amber salad set they'd received as a wedding present also graced the table.

Christmas seemed so far away and yet I knew it would be special.  Santa had seen me on 5th Avenue in Manhattan.  Among all the tall buildings, he knew I was there.  Turkey consumed, it was time to watch the black and white rerun of Miracle on 34th Street.  I’d already had my Macy’s miracle.  It was going to be a wonderful Christmas.
Posted by Joyce Lighari at 1:58 PM