The ophthalmologist was old. He was nearing retirement. His manner was very gruff.  He was old fashioned, no receptionist, no nurse, just him and his equipment. His equipment was very old as well. As I held my screaming infant down he looked in his eyes with hand-held equipment. He had a hand-held instrument that sat directly on the eyeball to measure the pressure in the eye. He placed this instrument on his right eyeball. 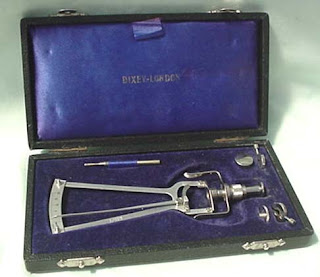 I found the emotional strength to keep it together. Finally, with a worried look on his face, the doctor had a verdict. He said, I’ve never this before. You usually see it only once in your practice. Your son has glaucoma.

Glaucoma?! That was a disease of an old person.

He continued. I am not equipped to handle this. He got on the phone. He called St. Louis. A doctor’s office at Barnes hospital answered. An appointment was made for the next day. It seemed there was an urgency. If his eye were to be saved, we’d need to act quickly.
The old ophthalmologist softened some. He said, these doctors know what they are doing. I hope that they can help. I wish you well. He smiled that smile that is mixed with pity and good wishes.
As I carried my infant down the stairs, to the car, I thought – will he be blind? What does this mean? Can I manage? I got to the car to see my two year old hanging out the window smiling. She made me smile. I said to my husband, it’s bad. He said nothing. I told him that we had to go to St. Louis the next day.

I stopped at the library on the way home. I’ve always been a research oriented person. I went to the card catalog and looked up glaucoma. Hannibal didn’t have a great library but I found out that glaucoma in infants was very rare. I also found out what glaucoma actually was, it is a disease of the eye that causes pressure. Untreated, it causes blindness.
While I was in the doctor’s office, my husband was playing with our daughter in the car. It was warm, the car had no air conditioning, and the window was open. One of the stories that my husband loves to tell to this day, is about that time sitting in the car with this daughter. There wasn’t a lot of pedestrian traffic on this main thoroughfare of Hannibal, but there was some. Some young girls were walking together on the sidewalk. As our little girl was watching them with her head hanging out the window she became quite indignant about these girls. With the precociousness of a bright two year old she yelled out the window at them, GET OFF MY ROAD.
I don’t remember what we ate or what we did that night. I do know I prayed. My mother came from Columbia to stay with the other children. I was scared. I had no idea what the next day would bring.
I held my son tight that night. It was hot, we had a window air conditioner in the living room. Sleeping upstairs was impossible. I would sleep on the open up couch with the baby. The rest of the family, including my husband, would be lined up on the floor like refuges from the heat.
The next morning we got in our Escort and made the first of what would be many trips to Barnes Hospital, the Children’s Hospital and the McMillan medical office building. Our first stop was the McMillan building, 7th floor and the offices of an ophthalmologist who specialized in congenital glaucoma. 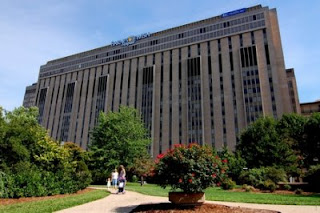 Everything about this new doctor was better. He was skilled. He was kind. He had better equipment. His diagnosis was the same. His urgency was also the same. Immediately we were sent to the Children’s Hospital for admission. The next morning would be the first “examination under anesthesia” for our six week old son.
It was a ward of four children. One of the other families who waited in agony for surgery was a young couple from Illinois. Their daughter was born with spina-bifida. The sadness and pain of the parents in that room was palpable. As our son fussed in the crib, my breasts engorged with milk I couldn’t give to him. We were not prepared to spend the night. We had no clothes or toothbrush. We didn't sleep much as we crouched under the crib with our heads on one pillow we attempted to sleep.
Posted by Joyce Lighari at 5:00 AM