Tip Toe Through the TULIP

I was very insecure in my faith for a long time. I’ve mentioned that I could get an award for the most trips to the altar for salvation. Here was this little church girl who was so riddled with insecurities that she was sure she was perpetually “lost.” 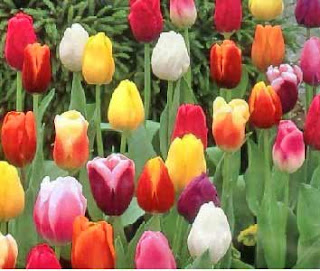 Several years ago, I worked in a church office in Tennessee. My official title was secretary. Like secretaries everywhere, the term didn’t fit the job description. In my case, I also filled the pulpit when the pastor was gone, including many Sunday mornings. I answered deep questions on the phone, like the day someone had committed suicide in the community and someone was worried about their soul. I prayed with people, counseled people. When a female came in for counseling, if they didn’t already have a relationship with the pastor, I counseled them. I was a lot more than a “secretary.”
One of the true secretarial duties was to record data. I recorded in the official notebook baby dedications, baptisms, and deaths. I designed some nifty certificates for baptism. On two of them, I verified that I had baptized a daughter and a grandson. In spite of having to use a typewriter to enter this information, it gave me joy to see the significance of people’s lives recorded.
The data I found less interesting was the prayer/decision cards. It seemed the same people were getting saved or re-dedicating their lives on a routine basis. This would make great sociological research for someone.


The Children’s Pastor was the biggest contributor to this pile. About once a quarter or more often she would be evangelistic. There wasn’t a lot of fluctuation in attendance, so as I was, they were church kids. I don’t know what she’d tell them. I imagine she scared them about hell. That was a common theme in this church. Year after year, they celebrated Halloween with a horror house to scare people into decisions for Christ. I never once saw any of the 100’s of people who made decisions continue in the faith. 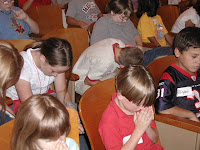 On the Sunday that Pastor Judy was evangelistic, she would come beaming with a stack of decision cards. Glory Hallelujah, we have a revival going on in Children’s Church. I would thank her and start the computerized recording of her victories. Eventually national headquarters would beam with excitement that so many victories had been won in this little town in Tennessee. These successes enhanced the status of the pastor, who desired to move up the ladder of church leadership. I guess it worked, he has.
I had a database. I had all of these children already listed. If there was a new child, next to their decision, Pastor Judy would write “first time salvation.” Then there would be ten or twelve repeaters for salvation. I wondered how she determined that they needed another salvation instead of just checking the re-dedication box? It was my job, so I recorded it as she gave it to me. I thanked God my children were too old for Pastor Judy.  My children had been taught that there is a security for the believer.

This brings me to Calvin. Yesterday I was reading Calvin. I never thought Calvin would have much to say to me. I was first interested in Calvin in Junior High School. I remember asking my Youth Pastor to explain to me what Calvinism is. He gave me the standard TULIP. He also explained how our doctrine was different from his – we believed in Arminianism.  If you are a nerd like me and want to read more about the two, go here.
I asked those questions because I wanted some security in my faith. In my warped insecurity view of my own spirituality, I decided maybe I wasn’t one of the “elect.” I thought maybe if I just kept hanging around and repenting, God would decide to let me in anyway. While that seems childish and laughable now, it was painful at the time. I didn’t need more salvations, I needed to understand the one already given to me. Sometimes we think our own piety and spirituality will bring salvation. I needed to know about grace.
As I read Calvin yesterday, I found him rich. I think I actually found an answer to the struggle I had as a child, a struggle for salvation.  Saving grace always stayed in my head.  My view of God and His word still often just stays in my head. It has difficulty getting to my heart. Listen to what Calvin says:

It now remains to pour into the heart itself what the mind has absorbed. For the word of God is not received by faith if it flits about in the top of the brain, but when it takes root in the depths of the heart that it may be an invincible defense to withstand and drive off all the stratagems of temptation… It is harder for the heart to be furnished with assurance than for the mind to be endowed with thought. The Spirit accordingly serves as a seal, to seal up in our hearts those very promises the certainty of which it has previously impressed upon our mind; and takes the place of a guarantee to confirm and establish them.                                                John Calvin on Faith