Sometimes those of us who come from a Charismatic/Pentecostal background are really quick to say that God told me this or that.  I was watching something yesterday. One by one, a person would come up and say The Lord would say to you…  I do believe in that sort of stuff. I also find that God speaks to me the most loudly in the everyday.

To say that my oldest son was difficult to raise is an understatement. This child was forbidden from sitting in a Sunday School class when he was three. For some reason or other he decided he was a dog and would only bark in the class.  Then he jumped up to the basement window and barked really loud. He was in the principal’s office his very first day of Kindergarten.  One time he decided to practice being a knife thrower. He put his younger brother up against a door and threw my kitchen knives at him. Fortunately, he didn’t kill his brother.

One day I went to church and as was often the case, someone said something to me about my son.  It hurt my feelings.  It was so unfair. I didn't tell him or teach him to do those things.  I went home grumbling. I thought I’ll never go back there. I was seriously wounded. However, I went back that night. I was late. They were doing that handshake thing.  I ducked in the bathroom to avoid those phony smiles.  Someone tracked me down to say hello.

After she left, I grumbled some more.  While I was talking to myself complaining about “these” people, I heard another voice in my head. This voice said, you know how you hate it when people blame you for the things Nathan does?  Before I could answer I heard this same voice say, yeah, that’s the way I feel when my children don’t listen to me too.

All of a sudden it made sense. God teaches us and tells us in His word how to live. His children, us, you and me, we don’t listen any better than Nathan listened to me.

The other day I heard that voice I heard that day again. I heard it in relations to another child. I had been talking to someone about the pain of having a child who has rejected you.  I have one of those. While I try to console myself in every way possible, to have your child reject you is one of the most difficult things in my life.  Sometimes the pain is unbearable.

So what did the voice of God say to me the other day? He said to me –

Joyce, you know that pain you feel? I feel that pain too.  I have so many children who have rejected me too. I love them even more than you love your daughter.  It pains me that they reject me. 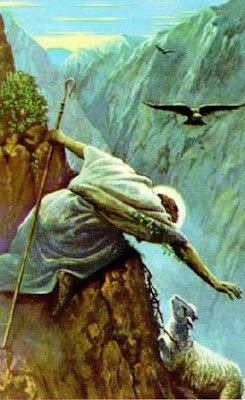 Can you imagine God with that type of pain? Even if you don't have a child who has rejected you, you can imagine how bad it would be.

I thought of the story of the prodigal son (Luke 15:11-32). I thought of the story about the 99 safe and the shepherd goes after the one (Luke 15:3-7).  I thought – this would make a good sermon.  If we were in church preaching this sermon I’d probably ask you if you’d been wounded by the actions of some of God’s children. Especially those ones that you think should know better – the ones sitting next to you at church.  God is saying to you like He did that day to me in the bathroom –

Or maybe you are a prodigal, rejecting Him. He’s pained. He’s searching for you. He’s looking for you.

I guess this is where I call for the worship team and give the invitation.