Coffee is a great thing. I love coffee. I used to own a coffee shop. Today my coffee tastes terrible. Not sure why. Is it just me? Is it the coffee? I don’t think it is the coffee since I buy huge amounts of whole bean Dunkin Donut coffee when in Tennessee and bring it back to South Dakota.  I have a great coffee maker so that’s not it either. 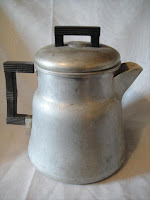 I’ve been drinking coffee since I was a small child. My father always had to have a skvett of coffee before going out the door. A skvett is like a splash or drop. The coffee was made in a small four cup aluminum percolator coffee pot.  Percolators are amazing things. I’ll bet some younger people have no idea what a percolator is or how to make coffee with it. It is a magical invention that somehow knows exactly when the coffee is done and stops the percolating action. Maybe that’s what I need to do, get rid of the Cuisinart and get a percolator at Goodwill.
When my dad would have a skevtt of coffee, it was usually reheated coffee. Every time it reheated it got a little stronger. Sometimes he'd drink it black.  Often he would drink it with canned milk and lump sugar or sukkerbite. I guess I better explain canned milk and lump sugar.  Canned milk is also known as evaporated milk. It is thick, comes in a can and has a distinct taste. I am not talking about sweetened condensed milk either, if you want to know more about canned milk, read about it here. 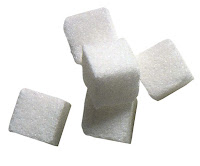 Now for lump sugar. Lump sugar is a ¼-inch cube of pure sugar. It also comes in a 1-inch rectangle.  Now this sugar is not for putting in the steaming cup of coffee to melt.  There is an art to using lump sugar. My father would put the lump sugar in his mouth and then drink the hot coffee.  The hot coffee would melt the sugar in his mouth and sweeten his mouth.  One lump of the ¼-inch cube sweetened his mouth long enough for a half a cup of coffee.  We even had fancy sugar tongs for company use.
There were times that my dad asked for an extra lump of sugar.  I don’t know if it was that I pleased him or just because, but he would ask my mother for an extra lump of sugar. He would call me; sometimes I would sit on his lap in his recliner in the corner of the front room.  We didn’t have a living room, we had a front room.  I was his lilla venn and if he was feeling particularly affectionate, I was his kjære lilla venn.

My dad would look at me holding a lump of sweet goodness in his hand. He would hold it up and ask me “How many times did Naaman dip in the Jordan River?”  I would reply with a big smile on my face, “Seven.” As my mouth watered for that lump of sweetness, he would dip it slightly in the coffee and count. En, to, tre, fire, fem, seks, each time dipping it just enough in the coffee so the coffee would flavor the sugar but not dissolve it. Just before the seventh dip, he would say, “What happened after the seventh time?” Anxious for the sweet delight I would say: “He came up clean.”
In would go the sugar to the coffee. Just a slight dip. Then that wonderful sugary delight would go into my waiting mouth.  Oh how wonderful it was … sometimes I’d sneak a lump of sugar but it never tasted as good as when my dad would dip it in his coffee.
It was a strange ritual. I have often wondered why he picked lump sugar to teach me a rather obscure Bible lesson.  It is found in 2 Kings 5.  I used to think that maybe I was supposed to be that nameless servant girl who brought healing to a powerful man.  Who knows?
I wish I could ask my dad why he chose Naaman.  He’d probably say he didn’t know. Regardless on a very cold morning in South Dakota I miss the warmth of my dad calling for his lilla venn. I miss a steaming cup of percolated coffee.  However, I have some coffee and some julekake in the kitchen. I think that is the closest I can come to connecting with my dad this morning.
Posted by Joyce Lighari at 10:38 AM