I've always been a Daddy's girl.  I miss my dad more and more every day.  That may sound odd since he's been gone for nearly 41 years. 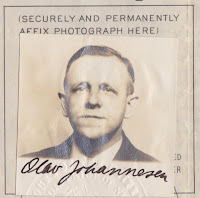 Today I've been thinking about how much I still want to be a Daddy's girl.  No, I can't climb on his lap anymore and ride the horsey on his foot while hearing Rida Rida Runka.  I can't snuggle in his arms and hear him say Lille Venn.  I can't beg for the extra piece of lump sugar while having my Biblical knowledge tested with the story of Naaman.

I want to be a Daddy's girl by being like my dad.
I have a very eclectic group of friends both in real life and on Facebook.  My scroll on Facebook fills up with all sorts of things - mostly nonsense.  I see things about how to love your pets and why dogs are wonderful.  I see things about politicians.  Unfortunately, I see a lot of hate stuff about people who are different or those who are perceived as enemies.  I see calls to action to repair a fire station or to vote for someone to be the next model.  I see Bible verses used AND twisted to suit an agenda.  And of course, what would Facebook be without a YouTube video.


It was YouTube video that caught my attention today and made me think about my dad. It was a video criticizing a popular Televangelist.  Now if you know me, you know that I don't really care for any of them.  I just don't care at all for big name preachers, teacher, prophets, etc. because most of them have egos bigger than their names.  I don't see a lot of Jesus in that.  Oh yeah, I know they build a well in Africa at times to try to get more money from you and pull on your heartstrings (I know, cynical) - but overall, they live in big houses, fly in private jets, and live a celebrity lifestyle expecting people to think they are God's only messenger.


You get the picture - I just don't care for any of them.  A YouTube video telling me that this one said that and the other said this - and how it isn't Biblical is not big surprise to me.  The person doing this "exposé" usually isn't Biblical either.  A quick scan through YouTube's similar offerings looks like the dual on Mount Carmel between Elijah and the prophets of Baal but without Elijah.  Everyone is right!  Everyone KNOWS exactly what God wants, thinks, says - they have TRUTH.  Here is the most ridiculous example I've found so far:


Here's where my Daddy comes in.  My Dad was one of those rare individuals that never said anything about anyone unless he could say something good.  Seriously!  He really was like that.  He wasn't stupid or naive - he just didn't say things.  If he could find even the smallest thing good to say about them, he would.  If not, he kept silent.


And I always knew who my Dad admired.  He would tell me he had a lot of respect for this one or that one.  He demonstrated a strength of character that I want to have.  I want to not be looking to expose someone, but to cover them.


There is a story in the Bible that we usually don't find in the children's coloring books about Noah.  In fact, we rarely hear it from the pulpit either.  It's found in Genesis 9:20-23.  Noah our hero plants a vineyard after all that time on the stinky Ark with the animals tossing around on the flooded earth.  He makes wine.  He gets drunk.  He lays naked in his tent.  One son sees him and does nothing.  The other two walk in backwards so as NOT to see their father's "shame" and cover him.  The son who does nothing is cursed.


So what's the lesson?  The lesson is we need to be careful how we "expose" people.  We need to keep our mouths silent, turn off the video cameras, and live by the scriptures:

By this everyone will know that you are my disciples, if you love one another.” John 13:35
I want to be Daddy's girl.  I want to focus on the positive, love, and speak kindly with mercy.
Posted by Joyce Lighari at 1:30 PM