The Circle of Life

Life has flow. It starts at a point and flows on to the next and the next. We speak of generations. We speak of milestones where life altering events occur. For most people, the path of life may meander and curve, but it flows in one continuous path.

My life isn't like that. My life is full of circles. Like a bad flow chart with seemingly no connections, I left one circle and jumped to the next. Very occasionally one of the circles touches another circle and a loose connection is made.

You can see these circles very clearly on Facebook. I belong to the Brooklyn Norwegian group. That group reminds me of my childhood, my dad, the streets of Brooklyn, laughter and joy, as well as sorrow and abuse. I belong to the Salem Gospel and Camp Challenge group - memories of my childhood church fill it's wall. Pictures that remind me of my heritage and memories of first learning about Jesus fill my heart as scan faces so familiar. I have friends who now sort of merge together in an odd kalediscope as they "like" and "comment" on my wall together. Each knows me from one of my circles. Each are a piece of my life. But except on a random comment, they have no connections.

Last night I revisited a circle. It was a short circle of time. It was a profound life altering circle. As I gaze at the picture of myself, sitting on the second pew behind the pastor and his wife, their daughter and soon to be husband, I try to look deeply in my face. I remember her. I remember that 17 year old girl who thought she was all grown up. I remember her hopes and her dreams.

Her husband sits on her left. Her son is held by someone on her right. She sees her future in a parsonage. She sees herself cleaning a parsonage, making a home, and ministering the gospel with her husband. She dreams of a Volkswagen van that will hold her and her husband as they travel as evangelists. She will sing. He will preach. Occasionally he will preach. Then God will call them to a church. Perhaps a small town in Missouri that only local people know. A girl from Brooklyn has already been transformed by her shrinking world and the culture of the midwest.

Little did she know that abuse would follow. I look at her and think the first slap had occurred. Nathan, her son, had already been slapped for crying. Her husband looks so kind in the picture, so angelic. He's told by people that he reminds them of Jesus.

I look at the picture again. I squint until I see my dad. Then I find my mom. They always sat in the same place. They always sat near the back. In two short years, my father would breath his last. I wouldn't know how to grieve, so I still grieve him all these years later. As I think of my own grief, I wonder about his. Was he grieving the loss of his "lille venn." Was he craving the arms of his little girl? Was he wishing he could let her ride his foot or cuddle on the green recliner? He was thrust once again to live as a foreigner. His Norwegian accent sometimes was not understood. They did it for me. They left Brooklyn in an attempt to make my life better. Within a year, I was married, then pregnant. This was not what they planned.

My eyes wandered over the picture. The circle exploded. Memories, names, laughter, good food, prayer, repentance, tears, and sorrow came together. The nursery where I rocked my son and talked to other mothers trying to appear grown up was visible. The altar was too. The old fashioned mourners bench that is so absent from our modern structures. The place where on a Sunday night you went and knelt to pray. The place you affirmed once again your devotion. The place you received pardon and joy. 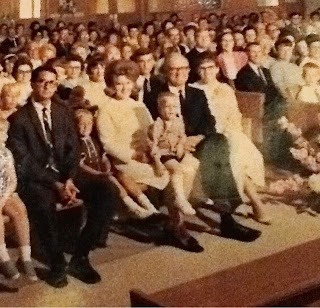 As I looked at that altar bench, I saw myself putting a blue and white receiving blanket on the bench. I would lay my son on his stomach on that bench. Usually sleeping, I would pat his back as I prayed. Like Hannah I would offer him to God. I would tell God, He's Yours Lord. Use him for Your glory. Call him to ministry. Protect him. Then I would plead with God to make me a better wife, and mother, and Christian.

There has been no evangelist van in my life. There never was a parsonage to live in - instead their were houses of abuse. There was abandonment and alcoholism. There was pain and destruction. Finally, a new circle, a new life, a new husband, more children, and new hope would emerge.

As I looked at that 17 year old, I wanted to hug her. I wanted to tell her, you have no clue all the ways life is going to change. I wanted to tell her nothing you think or dream of now will come true. I want to tell her that everything will change but one thing - a lifetime later, she will still love Jesus and He makes all things work together for good.
Posted by Joyce Lighari at 10:31 AM