As we drove up the muddy driveway, guided by the neon OPEN sign, we knew this was going to be an experience.  The day had already been more like the script of a movie with the familiar theme of city folk go to the country.  The country folk always seem to be the better in these movies.  This time, we were the city folk I suppose.
Disguised from my modest roots, I was in a dress from Macy’s with a flashy bracelet from Stein Mart – both were from the clearance rack.  Most everyone else, except the beautiful bride (more on that in a later blog) were in jeans and t-shirts or a variation thereof.  The groom did have a suit on and looked extremely miserable.  Even the preacher who would pronounce them husband and wife was casually dressed in khaki and polo.  It could have been a scene out of My Cousin Vinny, or New in Town.  And I was the butt of the comedy.
That was behind us, a night at Vaught’s Restaurant and Motel awaited us.  Still in my “fancy” and tight dress, I jumped down from the pick-up.  That alone was a remarkable sight.  Held in with Spanx, I quickly yanked my skirt down to hide the black tubes.  In the office, unlocked, with entrance to the owner’s house fully exposed, was a note – I’m in the restaurant, come to the backdoor and yell – Karin.
It was cold, rainy and terribly muddy.  We opted to get back in the truck and drive the few feet to the back door.  By this time, a gentleman was coming to greet us.  He and Karin were the owners of this establishment.  He met us at the office, took our $52.50 and gave us a key.  A real key – remember when motel keys were real keys and had a key ring that was diamond shape with the number of your room? Yep, that’s what we had.  We would be in room 5. What a contrast to the elegant room with the Jacuzzi across the Hudson from NYC that I had stayed in two weeks ago or the posh room in downtown San Francisco that I slept in the week before.  Here we were in the capital of Ozark County, Missouri-Gainesville.  Ma and Pa recliners with two handmade yarn angels watching over welcomed us into the room.  It was clean.  It was immaculately clean.  Considering we had few options, this was a wonderful bargain for the night. 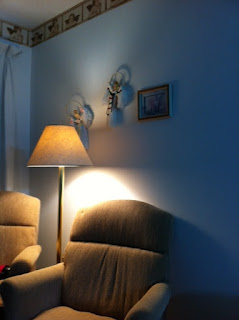 As we flipped on lights, we realized this was no ordinary room. This was the ANGEL ROOM.  There must have been over 100 angels images of one type or another in the room.  There was the angel border around the ceiling.  There were angel knickknacks everywhere –the kind they sell at Dollar General.  That made perfect sense since other than a grocery store, that’s about all downtown Gainesville had for shopping.

We checked everything. There was not a dust ball or dirty smudge anywhere.  Then I saw it.  Safety first!  There was a fire marshal in the county or region who did his or her job.  All establishments must have an evacuation plan clearly posted.  There it was – the evacuation plan was clearly posted on the door.  It said, this door is the only exit, and in small handwritten print it said door, window.  I laughed so hard.  I understood it was the law but the comedy of this sign was too much to contain. 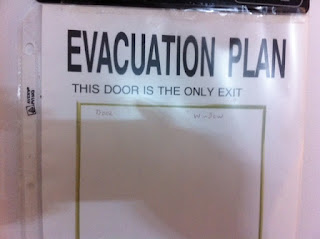 The bed was hard and had an old style chenille bedspread on it.  Exhaustion overtook us.  In the morning, the water was hot for a shower.  It got hotter after the toilet tank re-filled.  But where was the plug for the hairdryer? Anticipating no complimentary hairdryer, I had brought my own. My husband said there is no place to plug in in the bathroom.  There was no place to plug in near a mirror either.  Blindly we both attempted to dry our hair.

Then I spotted it.  There WAS a plug in the bathroom.  Too much time had lapsed since I had seen the single plug under the bathroom light.  There it was.  The big box on my 1800-watt hairdryer plug would never have fit under the light anyway.  But it was there.
Vaught’s may not compare to any of the posh-er establishments in the “BIG CITY” but they do understand hospitality.  We were treated like guests in their home.  In the morning, before our trek back home in the rain, we would feast on their breakfast in the adjacent restaurant.  As we opened the door to the restaurant, the hospitality and warmth of a country Christmas greeted us. 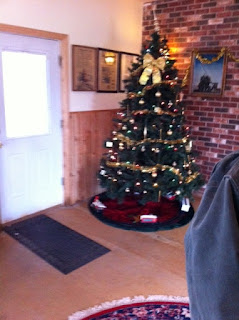 Yes, the country folk are the heart of this country.  They may show up in jeans and t-shirts to a wedding in a small hall with homemade spaghetti to eat, but they know how to live, they know how to say yes ma’am and yes sir, they know how to give hospitality and love their neighbor.  It was nice going back in time for a short while.  Not sure I’d trade my life for theirs, but it did make me remember to be thankful for all I have.
Posted by Joyce Lighari at 9:42 AM