I posted a quick status update on Facebook yesterday.  It really wasn’t a big deal.  It was just one of my venting times.  Sort of like the big sigh when you mumble under your breath…but this time the mumble was broadcasted by my fingers on Facebook.  Foolish me J 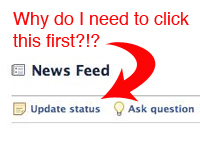 Not as foolish as I am sometimes.  I do think before I post, but… sometimes the knee jerk or should I say finger jerk reaction gets the best of me.  I’ve even been known to write a blog or two I had to later delete because of regret.  Oh well… most of you love me anyway.
It’s always interesting how expectations and feelings get mixed together with disastrous outcomes.  Someone I love felt snubbed.  The other person I love didn’t know they had been the snubber.  Rather than let it just work itself out, as I am sure it would have since they love each other too, I decided to play peacemaker.  I thought I’d help the process along.  I am a fixer by nature.  While I hate to be in the middle, I sometimes just step in it. 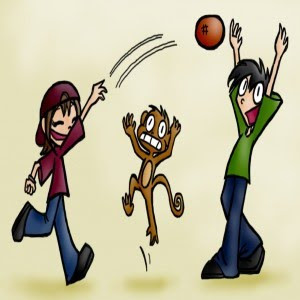 There is a reason they call that child’s game “monkey in the middle.”  You just should stay out of the middle.  But no… fixer Joyce decided to give a quick heads up to the snubber.  I knew snubber was clueless and any offense was unintentional.  Now firmly in the middle the snubber decided to take aim at me.  Wrongly accused the snubber was now offended and felt the need for a defensive move.  Sigh… new goal in life, STAY OUT OF THE MIDDLE – it’s never a safe place to be.
So in my frustration my fingers let my Facebook world know: The bible says, blessed are the peacemakers. Why is it that when I try to make peace between people they bite my head off?  Wise statements followed:
Actually none of these fit the situation.  But I appreciated the wisdom sharing.  I could think of a few global and political situations that could use that wisdom.  But the best peace of wisdom came the today.  It sort of closed out the conversation well.  It came from a childhood friend who always seemed to be more stable and wise than I.
I think she was referring to the people who were not at peace.  However, I had to laugh.  Yes, that’s true.  That’s me…  I’m the venter.  I felt better after my fingers were foolish.  I realized people cared even if they didn’t understand.  I realized there is wisdom in not being the monkey in the middle.
Amid the nonsense, Farmville, Café World, Mafia Wars, and spam, there is a wisdom on Facebook if you look for it.  I was thankful for friends and Facebook wisdom.
I will get back to camp stories later... I know you can't wait to read about my first camp romance :)
Posted by Joyce Lighari at 11:28 AM