I’ve seen a lot of snow in my life.  As a child, the wonder of snow was real.  It seemed magical as the flakes of white would fall from the sky.  I remember making paper snowflakes in kindergarten.  How magical it was as Mrs. Pellegrino, one of the first pregnant people I ever saw on a daily basis, showed us how to cut with those blunt stubby scissors and make the designs of a snow flake.  She told us that in nature every snowflake was unique. 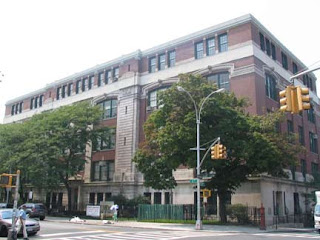 She might have even uttered the forbidden word God as she told us this scientific fact.  In those days, we still prayed in school.  Yes, even in NYC we bowed our head and said a generic prayer at the beginning of the school day.  During weekly assembly we would also recite a Psalm from the Holy Bible.  The Psalms were common to all Judeo-Christian faiths.
There was something ethereal about the snow of my childhood.  Full of life and vitality, Brooklyn was noisy.  The cars, the buses, the sounds of the nearby subway, the chatter of people, the sounds of stickball in the street created a cacophony of sounds.  They all stopped or slowed as the snow mounded deeper and deeper.  Cars would disappear under a blanket of white.  The buses would slow and even the subway was muted and hushed.
Anxious to hear the news that school had been cancelled, the TV or radio would announce the glorious news.  No school today in NYC.  I understand that is a rarity now, but it seemed to happen several times each year when I was a child.  Outside, bundled individuals with shovel in hand would begin digging out.  My father would start with the top of the stoop.  For those of you not from NYC, the stoop is the steps in front of your house.  We had four.  They were broad and wide.  I could jump from the top step to the pavement.  Then would come part of the “arey.”  An arey is the area in front of your house, sometimes bounded by a hedge, other times a fence.  It marked off the area where your living area began. 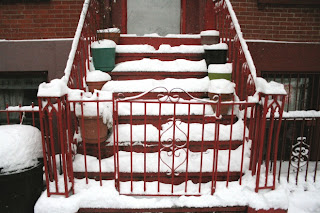 Once these areas were clean, the sidewalk was shoveled.  Unlike where I live now, within hours of a snowfall you could safely walk the sidewalk to get to the bus or subway.  It was the law. I never saw the snow police or even heard of them.  People just did what was right.  On many blocks however, there’d be an empty lot.  That patch would remain ice until God melted the snow, or someone decided it was time to chop it away.
In wonder I would watch cars being uncovered.  Completely covered the tank like vehicles of the 50’s and 60’s would slowly reappear, engines started and cars moved.  After a storm alternate street parking was suspended.   Of course one didn’t need their car during the storm, nor did they ever need one.  Thousands of New Yorkers still find a car an unnecessary item.  My parents felt that way and never did we own a car.  What we couldn’t walk to, we could find a bus or subway to take us there.
I was a sissy child, never one for confrontation or rough play.  This included snowball fights.  I remember building snow forts.  I liked that.  I would occasionally build a snowman in my arey.  Unfortunately, after the snow fort was built the inevitable snowball fight ensued.  I couldn’t throw so my snowballs always missed their intended target.  Worse was, I always got hit.  Usually in each fight someone would be a master at ice balls.  An ice ball is where you put a chunk of ice in the middle of the snowball.  This dangerous weapon would usually involve blood flowing on the fresh white snow and someone taking a trip for stitches.  Fortunately, I avoided that fate.
Eventually school would be open.  Brooklyn would resume its hustle and bustle.  I would trudge the 6 blocks to PS 94 and have to remove layer upon layer of clothing before reciting the pledge, praying and singing My Country Tis of Thee.  The room was warm; the kindly face of Mrs. Pellegrino told us it was time for work – the work of playing house, building blocks and other such wonders of Kindergarten play.  The windows were decorated with snowflakes made with chubby hands.  It was wonderous.