Yelling Fire in a Crowded Theater

I am not sure I want to write this blog. I might lose some friends. I might be misunderstood. I like to get along with people. I really do. It isn't that I don't have a backbone, I just would rather sing Kumbaya and hold hands. Or maybe go back to the 70's and sing And They'll Know We Are Christians By Our Love. Those were the days. Flower children and Jesus Freaks, holding hands and giving out flowers. Now we want to burn things. What's happened to us? 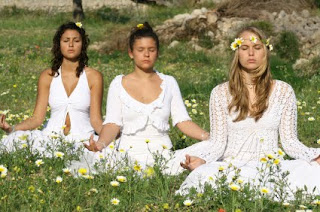 I have a young friend that I met by chance (as if that's possible with me). I like her. I've already learned from her. She is an iconoclastic feminist Native Woman who loves Jesus. Yeah, that is possible. What I've learned from her in the short time I've known her, is sometimes you just have to say what needs to be said.

I learned something from an atheist friend yesterday too. Yes, I am friends with several atheists. I like them as people. The one I met before he was an atheist. I remember him as a bit judgmental and rigid at the time. Now he's at times a little too outspoke for my taste but over all a much nicer person. I am not saying that this is because he became an atheist nor am I advocating being an atheist, I am just saying that he became a nicer individual than I remember.

I've been told to preach before. One time, in a particularly powerful prayer time, an African American preacher got right in my face, had his finger in my face and said PREACH, PREACH, PREACH. Then he blessed my feet, because feet that bring good news are beautiful. (Isaiah 52:7) 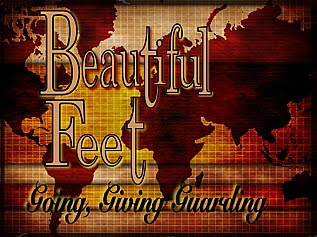 So let me get to the point. I am really, really concerned about Dr. Jones and his plan to burn Qur'ans. I am not defending Islam or promoting it. But I understand some things about Muslims and how they feel about the Qur'an.

One of my brother-in-laws was here earlier this year. Since then, he has gone to Mecca to fast and pray. He's done this many times. He likes to go for the first week or two of the Muslim month of fasting Ramadan. He's not radical. He's not fundamentalist. He's overall a pretty nice guy. He has come to hear my preach and was moved to tears by it. He highly respects me as a woman of God. 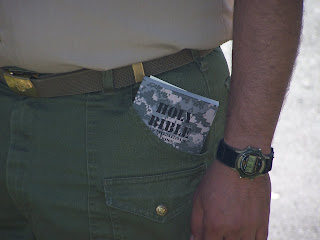 While we were talking about some scripture - he loves to talk about the Bible with me - I pulled my Bible from my pocketbook which was on the floor, by my feet, in the car. He get all upset. Not angry, just upset - he said "that is a holy book! How can you have it by your feet? Where is your respect for the holy book?"

My husband chuckled and I ignored it. I knew from other discussions that it is difficult to explain that to me, the paper and binding isn't holy, it's the words when I read them, internalize them, preach and proclaim them that they become the Word of God.

Someone once explained to me that to compare the way a Muslim feels about the Qur'an to the way we regard the Bible is not a good comparison. A better comparison is to compare their regard for the Qur'an to the way we feel about Jesus. Even that might not be the best comparison since often we are a little casual about the King of Kings, Lord of Lords and Savior. Sometimes I think we need to remember what John saw in Revelation 1:12-15.

There are so many reason why all this hate rhetoric about Muslims is un-Christian and un-American. But what troubles me the most today? What compels me to write today is this - What Dr. Jones proposes to do in Florida will inflame emotions around the world! I know that it is not right to judge every one by the actions of one man. It is fine to say, you shouldn't do that. But the reality is, that is exactly what will happen. People who love their holy book will hear about the actions of this so-called Christian. They will judge all of Christians. (hmmm, seems there is a lot of judging all Muslims by the action of a few but deadly terrorists who say they did that in the name of their religion too)...

The other reality is that it's not you or me or even Dr. Jones who are in the most dangers from retaliation. It is the indigenous Christians that live in Muslim countries that will be hurt the most. We all are horrified by stories of the persecuted church. We pray for them. We have a Sunday designated for awareness of persecution.

If you really care about the persecuted church, stop the hate speech. It's your brothers and sisters who don't have much freedom as it is who you are hurting the most. It's their churches that will be burned in retaliation. It is their woman who will be misused.

I know what some of you are saying. You are saying that the Muslim's should do that. You are right! They shouldn't. But let me ask you this. If you were in a crowded theater and yelled Fire when there was no fire, people were trampled and killed because of your actions. Would you be responsible for their deaths? Or would it be the people who trampled the others? I think you'd be responsible at least as much, if not more, than the stampeding people. So... we have a choice. Hate speech is a bit like yelling Fire in a crowded theater when there is no fire.

My fervent prayer today is that Dr. Jones repents and does not burn anything.
Posted by Joyce Lighari at 11:00 AM